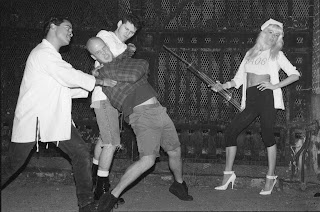 The band picture used when Darkness City was recorded made me ask Farrah why she was the nurse in the picture, and the men the doctors. I know it was the 1990's before the #me-too movement, but did Farrah get trapped into those old stereotypes, or was she exploiting masculine desires to be dominated by a nurse as I see in this photo. If so she’s a truly super intelligent villain of an evil woman.

What I see in this video is that Farrah Fire has not stepped into any of the usual traps woman step into when doing a video which turns out to be about pleasing the dog desires of men. You know every dog needs to go out for a walk. If Farrah Fire did try to appeal to the dog (no offence to dogs but pig would be to harsh) in men she certainly killed it when she decided to dance around dressed up in a peace head cultist leather outfit with creepy monster mash make-up spliced with the ultra-sexy guitar swinging dominatrix. Talk about sweet and sour sauce! 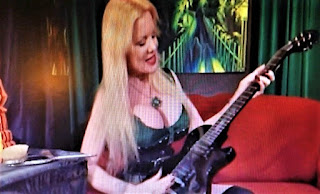 As for setting fire to the park it looks like the black cube made Farrah do it. I’ve watched all sorts of things about these black cubes strategically placed around the world for satanic reasons… is this the message? If so you are truly a diabolical feminist. Your tough yet feminine style shows a classic originality that has been created by a woman who sees. I can understand why Genya Ravan was Farrah’s producer on the track. Because Genya, a tough cookie back in her day and her band “Goldie and the Gingerbreads”, made it into the Rock & Roll Hall of Fame. Got to admit the guys in Farrah Fires previous band, formerly known as “Bettyford”, were no slouches either. Like those drums Kidd Lynch 666 hits hard reminding me to go out tonight instead of sitting at home watching YouTube. Thanks for the reminder and thanks for reminding me not to drive but instead take a cab. I’m looking forward to that next video, Farrah Fire.

Posted by Kristie Sharp at 7:44 AM